“STRIKE STRIKE, AT THE TRUNK AND THE BRANCHES WILL FALL OFF THEMSELVES.

Listen but to my counsel, and I shall plant the Maratha banner on the walls of Attock”.
– Baji Rao

Chhatrapati Shahu Maharaj was deeply impressed and said: “By heaven, you shall plant it on the Himalayas.”

THE UNSUNG HEROES OF BHARATH : BAJIRAO PESHWA – The undefeated General who routed Mughals. Man who spread the fire of Dharma and Rastra Bhakti !!

The greatest Maratha Peshwa(Prime-Minister) and General of Chhatrapati Shahu ji Maharaj Bhonsle. He was born in 1700 and named as Bajirao Ballal Bhatt who was chosen as Peshwa
General of Marathas at an age of 20 years.

During his twenty years tenure as a Peshwa he fought total 41 battles against tyrant Mughals, Nizam of Hyderabad, Nawab of Oudh etc. and never lost any of the battles.

A GENERAL WHO SPREAD FIRE OF DHARMA and DESH BHAKTI

He won all 41 battles that he fought in his 20 years tenure. He attacked Mughals in Delhi in 1737 and defeated Mughal general Mir Hasan Khan….collected Tax from the Mughal king Muhammad Shah and captured Delhi, installed Mughals as vassals of Maratha and Marathas became De Facto rulers of Delhi under Chhatrapati Shahu ji Maharaj.

He went on to defeat Nizam of Hyderabad, Nawab of Oudh, Nawab of Bhopal in the Battle of Bhopal when they tried to help Mughals. 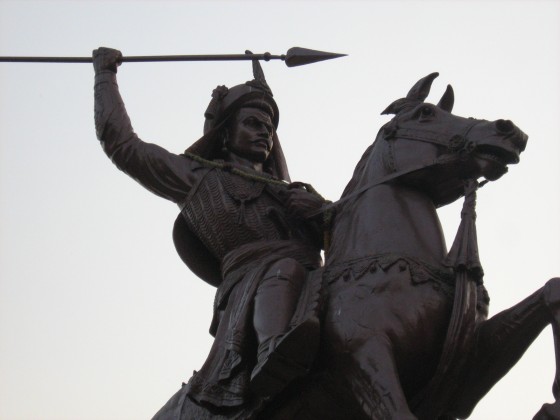 All of them advanced with their large armies, they met at Bhopal. The combined strength of Mughals, forces of Nizam of Hyderabad, Nawab of Oudh, Nawab of Bhopal, Hindu Kings exceded 2,00,000 soldiers and had cannons with them. On the other hand Marathas under Peshwa Bajirao were just 70,000 soldiers.

The Battlefield was ready for Mughal alliance (2,00,000 plus cannons) and 70,000 swift Maratha force. It was like COUNT RICH EVIL Vs QUALITY RICH DIVINE

With the “Har Har Mahadev” war cry Marathas fought against a force which heavily outnumbered them but the swift tactics of Peshwa Bajirao proved fatal for the combined forces of Mughals,Nizam and Nawabs.

Later Nizam had to sign a treaty with Marathas in which Malwa was given to Marathas and Mughals, Nizam of Hyderabad, Nawab of Oudh, Nawab of Bhopal had to pay tax to Marathas.

This established Hindwi Swarjya in the whole Subcontinent of which foundation was laid by Maharana Sanga. The Marathas became the unrivalled champions of the whole subcontinent after
defaeating Mughals, Nizam of Hyderabad, Nawab of Oudh, Nawab of Bhopal, traitor Hindu kings, Rohillas, Mewatis, Bangash Pathans, Portuegese under Peshwa Bajirao. The Marathas became protectors of Sanatana Dharma, reinfusing hope and life to dehydrating Hindus in Akhand Bharath, the de facto rulers of Delhi until British colonized whole sub-continent.

He lived a Sanatana Dharma all life being its protector and its paramount model. He was offered a muslim princess in marriage whose name was Mastani. He was just to her, provided and protected her without discrimination and loved her and didn’t force his religion on her and her son despite pressure from his own family. HE PROTECTED HIS OWN DHARMA AND NEVER VIOLATED THE DHARMA OF OTHERS,

EVEN IF IT WAS HIS MUSLIM WIFE, HE NEVER TRIED TO ENCROACH her belief.

When Mastani wasn’t welcomed by his orthodox family, Peshwa constructed a seperate beautiful Palace for her named it Mastani Mahal. She gave birth to a boy and the boy was raised as a
muslim despite being born to a Hindu Father who established Hindwi Swarajya, the boy was named Shamsher Bahadur whose son Ali Bahadur ruled a part of Bundelkhand which is called Banda (UP) now.

She was grand daughter Nizam, the daughter’s daughter of Nizam and Maharaja Chhatrasal of Bundelkhand. She was raised as a muslim despite being born to Hindu Maharaja. She was married to Bajirao when Bajirao defeated Muhammad Bangash who tried to sack Bundelkhand but was killed by Peshwa. She remained muslim throughout her life and her progenies also raised as muslim and given Jagir(feudal land) at Banda, UP. True man who respected and maintained wife’s right to freedom of religion in that era where hindu womens were took away and kept as sex slaves by Mughals, Pathans etc.

Sadly he died at a very young age of 39. If he would have lived more then he could have conquered what he promised the Attock and achieved the same glory like that of Maharana Pratap and
Chhatrapati Shivaji Maharaj.

Later on his son Balaji Bajirao Peshwa captured Peshawar and his another son Ragunath Rao kept his father’s promise and planted Maratha flag at Attock and establishing Hindwi Raj in Attock (now in Pakistan). Later one of his progenies captured Lahore for the Sikhs.

How to prevent Heart problems with Rose Flower?

Why all mantras are written in Sanskrit?