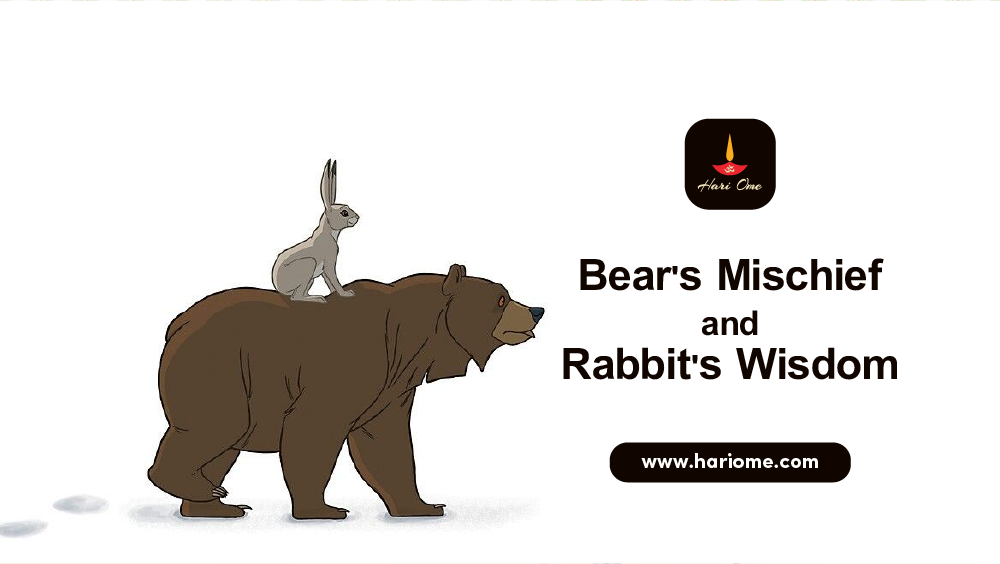 A rabbit that lived in the forest on the banks of river Champawati was famously known for its intelligence. It used to give good advice when the other animals were in difficulties.

Once, the rabbit had to travel too far to find food. It became dark when it ate enough food and headed back. Along with that, it started to rain, and the rabbit got drenched completely. The rabbit started feeling cold and knocked on a nearby house door. The door opened after a while.

The bear was standing on the other side of the door, and then the rabbit asked, saying – “Can I stay until the rain subsides?”

The bear led him inside and gave him a towel to wipe along with a hot drink to soothe the cold. Looking at the rabbit, the bear said – “Looks like the rain is not going to subside tonight. So, you can stay here tonight”.

The fireplace next to them is burning, and the heat emerging felt soothing to the rabbit.
Meanwhile, the bear said,” ‘I’ll ask you something if I can’t sleep. If you answer right, it is fine, and if your answer is wrong, I will hit you on the back”.

Listening to this, the rabbit thought Wisdom was his property, and he could answer anything. So, he nodded, saying, “okay,”. The two slept side by side, and being fully tired, the rabbit felt very sleepy, but the bear did not sleep. The bear shook the rabbit and asked, “Answer my questions,” The rabbit replied, saying,” Ask”.

The bear pointed to the door across the driveway and asked what it was, for which the rabbit thought, “Is this even a question, and answered, “It is a door”. The bear immediately slapped on the rabbit’s back and said – “No! It is protection”.

The rabbit’s drowsiness flew away after the bear hit him on the back. This time the bear showed the house’s roof and asked the same thing. When the rabbit says “roof”, the bear again hits him on the back and says, “No. It is a Shadow”.

This time the bear showed the honey in the hanging pot and asked again. Fearing that the bear would hit again if he said ‘honey,’ the rabbit slowly said ‘Sugary’. But like always, the bear hit the rabbit again and said, “No, no, it is sweetness.”

The rabbit realized that the bear planned to hit him no matter what and wanted to teach a lesson to the bear. It endured the pain until the rain subsided.

After a while, the bear pointed to the corner stick and asked the same thing. This time the rabbit thought that the bear would break his back anyway and answered – “You should answer as I don’t know what it is”.

The bear smiled and sarcastically said, ‘Everyone says that rabbits are smart. Is that all a lie?” to which the rabbit replied – ‘Is it profitable to answer as you already decided to break my back anyway”. The bear was startled, knowing that the rabbit realized everything and stayed silent for some time.

In the meantime, the rabbit got a clever thought. The rabbit picked up a flaming stick in his reach and kept it near him. If the bear tried to beat him again, he thought he could get the stick in touch with the bear’s hand.

After a while, the bear got excited again and asked, ‘Don’t you know the answer? It is a stick,” and tried to hit the rabbit again. The rabbit immediately kept the burning stick to obstruct.

Seeing the bear shouting in pain, “If you are mischievous, then I am smart enough to deal with it. The rain got subsided anyway. So, I am leaving”, said the rabbit and ran away.

The bear realized it was a wrong idea to trouble a wise one.

How to bring luck into your life?

Why do Hinduism has the aspect of worshipping Nature?