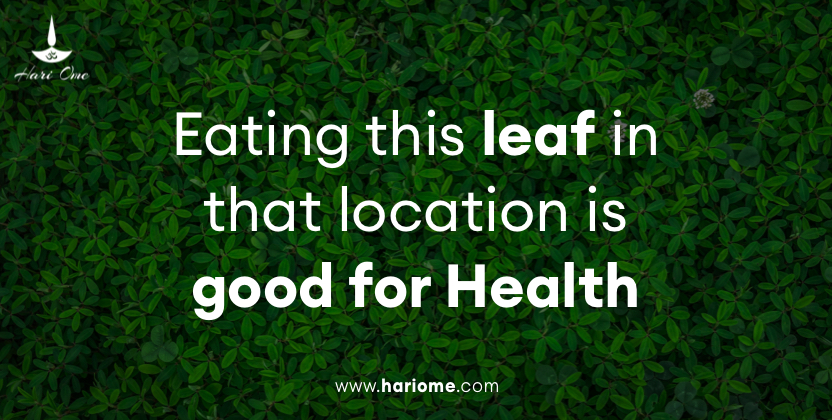 As per ancient mythology, the saint Hathiram Bavaji or Hathiram baba lived in Tirupathi 500 years ago. There are pieces of evidence that Lord Venkateswara himself played dice with Hathiram baba. Initially, he used to eat Srivari prasad as his lunch. Going on, the temple officers rejected offering the prasad for free and came up with a condition to provide prasad only in return for bringing firewood.

The scriptures say that Hathiram baba is a well-built man with a strength of an elephant. So, to get the Srivari prasad, he used to get the wood and cut them to pieces with an Ax. As days passed by, Hathiram baba started feeling sad about spending too much time getting the firewood and thought of keeping it aside and meditate. Then, he left the temple and went far away into the papavinasam forest to meditate.

After reaching a place in the forest, Hathiram baba felt very hungry, and he started eating leaves from a small tree. As they tasted sweet, he had many of them satisfying his hunger and drank some water. He later felt a bit worried and doubted if the leaves would cause any harm, but nothing happened.

So, he soon forgot about food and started eating the same “Baddhaku leaves” every day and continued the same for the next 12long years until he completed his meditation. These leaves are also called “Ramabadhram leaves” or “Ramapatthi“. As Hathiram baba lived eating only these leaves besides having hundreds of trees in the forest, it is considered the holy deeds of Lord Venkateswara as per few ancient scriptures.

These “Baddi trees” are highly grown and found only in the Seshachalam forest. Devotees can find the tomb of Hathiram baba near Venugopalaswamy temple in Papavinasam. They distribute these leaves to the devotees who visit the temple. There is no restriction to the quantity, and they believe eating these leaves gives people good health.

Why Rama refused to come back from forest after the death of Dasaratha?