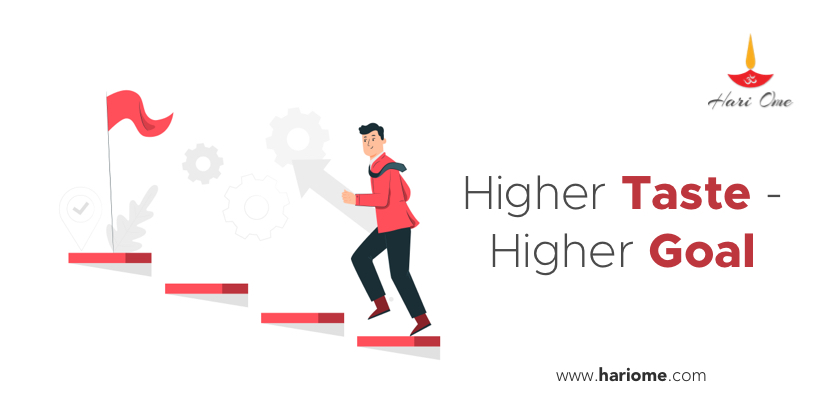 The Taste has to be experienced not only by the tongue but also by intelligence. Once a person tastes victory, he would always aspire to be victorious. In the case of victory, nobody tastes the victory with tongue, but with intelligence. One more important point is that unless one develops a taste for any work, it never begins. This is the experience of everyone while taking meals. If tasty food items are not seen on the plate, one never develops an interest to take food.

Therefore, one has to develop taste in the work and also in the results for the successful completion of the work. The younger generation has to understand this prime point.

When it comes to taste, there are tastes of lower order and higher order. For example, if a person while proceeding for a wedding feast, stops for eating snacks at a roadside, he is certainly termed as a person of lower-order taste. It is not an intelligent activity to eat at the roadside while going for a grand marriage feast in the next few minutes. Therefore, it is essential to know the difference between lower tastes and higher tastes. Similarly, there exists a difference between higher goals and lower goals in one’s life.

On the day of life turning entrance test, if a student goes out to attend a function at his neighbour’s house, it surely amounts to pursuing a lower goal at the expense of a higher goal. Though attending the neighbour’s function is important, it surely is not so on the day of an entrance test. On the day of the entrance test, only taking the entrance test should be the topmost goal. But, there is always a competition between different tastes and goals of varying order. Those who concentrate on higher tastes or higher goals only will shine in life. Only they can bring name and fame to family, society and country. Bhagavad-Gita (2.59) gives perfect guidance in this matter as under:

“Though the embodied soul may be restricted from sense enjoyment, the taste for sense objects remain. But, ceasing such engagements by experiencing a higher taste, he is fixed in consciousness”.

Should concentrate on a higher goal

In Bhagavad-Gita, it is described as “Param Drustva Nivartate”. It means refraining from lower taste by experiencing the higher taste. An intelligent student who is appearing for life turning entrance test doesn’t care for any pompous festivities at home and will concentrate on his higher goal. Those who have higher goals in life and those who have higher taste will reject the lower taste and move ahead. The person who is aiming for an Olympic gold medal will surely spend a minimum of 10 hours practising every day leaving all other enjoyments. The scientist who is aiming for a Nobel Prize will spend years in the laboratory or in deep contemplations. Then only wonderful results would emerge.

Young people who get attracted to lower tastes are surely are devoid of higher tastes and higher goals. Those who set higher goals with the help of seniors or well-wishers save themselves from allurements and achieve higher tasks.

Five yeas old Dhruv maharaja left all child proclivities and engaged in severe austerity, thus becoming the pole star. One has to take him as a role model. Youth shall practice sticking to higher goals through the mind drives them towards lower tastes. To be situated in such practice consistently, one needs association of saintly persons and experienced elders, and also perfecto guidance of Bhagavad-Gita.

Direction of the main door as per Individual Zodiac Sign

Why do we get dreams and what do they tell?