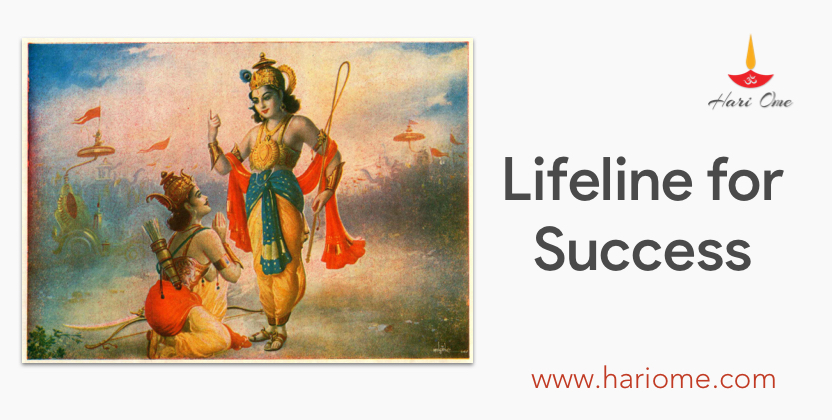 Everybody especially students wants to achieve success in all endeavours. Every student wants to pass examinations with full score, get the first rank in the institution and command great respect amongst all the students. Aspiration for victory is common and natural for everyone. But, only a few succeed in all endeavours, not all. Very few people achieve success to the desired and expected level.

What should be done to achieve success to the desired level?

What are the reasons for not achieving the success to the desired level?

Bhagavad-Gita gives precise answers to all these questions. Knowledge of Gita clearly throws light on the lifeline of success. Lord Krishna says

“As a strong wind sweeps away a boat on the water, even one of the roaming senses on which the mind focuses can carry away a man’s intelligence”(Gita 2.67),

thus hinting the main issue in achieving the desired success in our endeavours.

Lord Krishna gave a clear message on the lifeline for success for everyone’s benefit. A ship can sail smoothly only when the waves are not turbulent. Very turbulent waves make the ship to toss vigorously. To get success in our endeavours, we have to engage our senses, in other words, our body in some particular tasks. Legs, hands, stomach are the working senses; whereas eyes, ears, nose, tongue and skin are the knowledge-acquiring senses. All these senses put together makes our body, which engages in a particular task.

But, the difficulty is that even if one sense gets entangled in the sense object, it leads to the downfall of a human being. Then all the prospects of success get evaporated. Generally, for all animals, only one sense will be very strong. In fact, that itself becomes its weakness. For example, a deer has an extraordinary hearing capacity, but it also likes music so much. Hunter plays nice music to mesmerize a deer, and when it gets absorbed in the music, he kills it. Moths get attracted to the light of the fire and fall into it en masse. A fish doesn’t have control on taste buds. Hence, it falls prey to earthworm and gets entangled to a fishing rod. Thus, many animals meet destruction because of just one uncontrolled sense. What will be the fate of a human being if all his senses are not under control? How he can save himself from falling down if his senses are out of control?

Success aspiring students should take kabaddi game as inspiration and guidance. Kabaddi is fast becoming a popular game all over the world. In that game, a player from one group enters into an opposite party to touch someone for getting points. He should not only touch the player of the opponent group but also come back uncaught by the rival group. The member of the opponent group who got touched by the player will be declared as “out” and the player’s team gets points. When the player enters into the opponent’s court, six to seven players of the opposing team try to catch him. They jump on him, catch him with all force to make him declared “out”. Similarly, the student who wants success in any examination or life should be alert regarding all his senses. They might entangle him and make him ineffective in achieving any goals. The way an expert kabaddi player comes back to his place uncaught by the opponent team members and makes them “out”, a success aspiring student should ensure that he is not caught by senses. He should practice to “out” all his senses one by one and get full points. By such a wonderful achievement of sense control, he moves steadily towards his success flag.

But, now the situation is more severe and harsh than the kabaddi play. In that game, many people pull one player onto one side. In that situation the player may get “out”, but not dead. If all the people pull the player in all directions, certainly he would die. The present situation of students is similar to such an unusual condition. When he sits for studies, mobile phone pulls his ear to one side, WhatsApp messages pull his eyes to another side, fast food pulls his tongue to another side, thoughts of a friend pulls his skin to another side. This is really a dangerous situation. Therefore, all success aspiring students should take a lesson from the message of Bhagavad-Gita and take guidance from experienced seniors to control all his senses one by one for getting full protection from fall down. Success is sure for such a careful student. It means that sense control is the lifeline for success, as emphatically said in Bhagavad-Gita.

Do you know the temple of Shiva which cures all diseases?