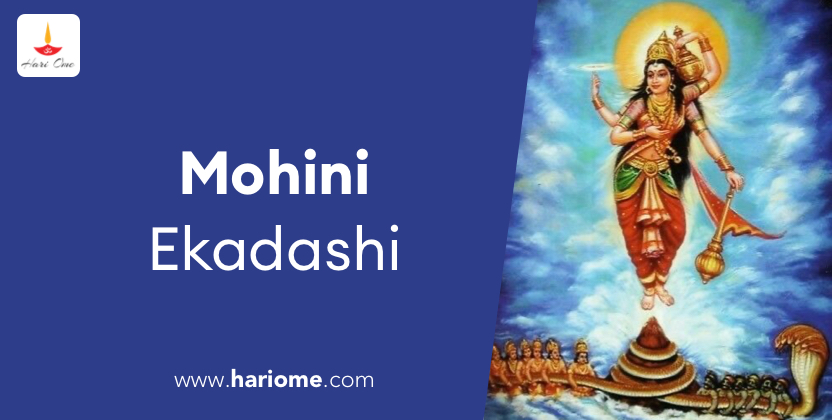 The other name of Vaisakha shuddha Ekadashi is “Mohini Ekadashi“. There is a huge fight between the devas and asuras after the Samudra Manthan for Amrit. To attain immortality, they must follow dharma, which is the right way of living or the path of rightness, and the entire world should be happy because of their deeds. But, the asuras (demons) wanted to drink Amrit and capture the Trailokya (three planes of existence). They didn’t care about the dharmas and knowledge.

As devas accepted and followed dharma(path of rightness) and knowledge, Lord Shri Maha Vishnu believed them to be the right people to attain immortality. So, he turned himself into a beautiful and seductive lady, “Mohini”, to acquire the Amrit from asuras and distributed it among the devas on this day. So, this day is also called “Mohini Ekadashi“. So, on this day, people should study the “Samudra Manthan” scripture and offer prayers to Lord Maha Vishnu. One should observe fast and finish it on Dwadashi. It is believed that following this ritual can help in getting rid of family issues and brings fame and wealth.

This year, Mohini Ekadashi will be observed on May 22. However, those who belong to the Vaishnava sect shall celebrate it on May 23. They refer to this Ekadashi as Gauna Mohini Ekadashi.

There was a city named Bhadravati on the banks of the river Saraswati. There lived a Vaishya named Dhanapala, who was full of cash; he was always engaged in virtuous deeds. He had five sons. The smallest of those was arrogant.

He used to spend his father’s cash on sinful deeds. One day, he was seen walking around the square, putting an arm around the city bride’s neck. Angered by this, the father kicked him out of the house, and the brothers-in-law also left him.

He wandered from day to night, drowning in sorrow and grief. One day he reached the ashram of Maharishi Kaundilya with the influence of some virtue. It was the month of Vaishakh. Kaundilya came after taking a bath in the Ganges. Munivar went to Kaundilya and mentioned with folded hands, Brahmin! Twilight! Pity me and tell someone such a fast, whose virtue can result in my liberation. ‘

Then Rishi Kaundilya told that in the bright fortnight of Vaishakh month, observe the famous Ekadashi named Mohini. The sins of many births are also destroyed by this fast. Dhritabuddhi fasted according to the method described by the sage. As a result, he became sinless, took the divine body, and went to Sri Vishnudham.

What are the benefits of Fasting?

Is there any way to reduce age?