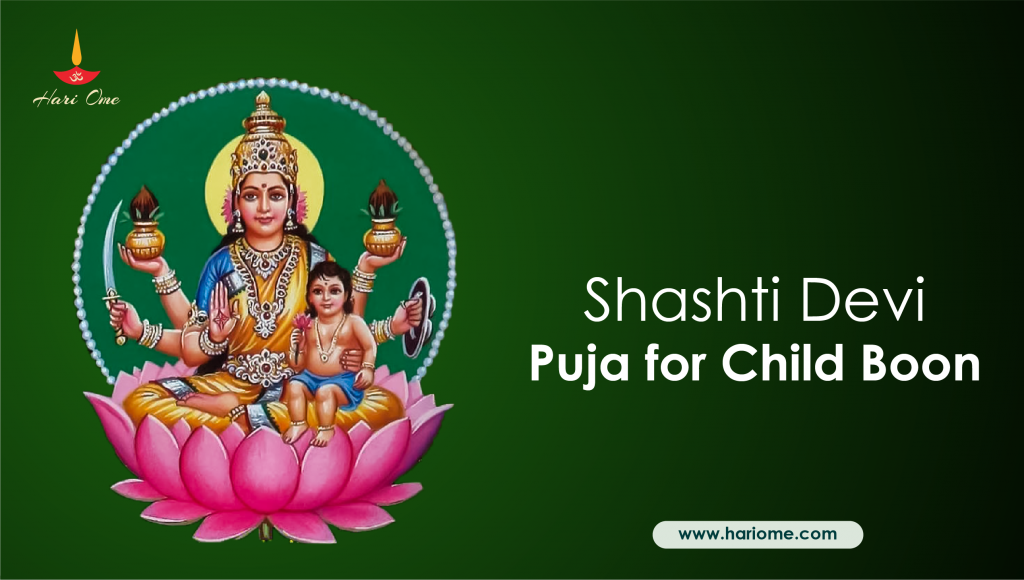 It is believed that Barren women be blessed with children by worshipping and observing the Vrat Vidhan of Goddess Shasthi Devi.

Shashti Devi is the sixth incarnation of Mother Earth, hence Shashti Devi’s name. She is the ladylove of Lord Kumara Swami. If the children suffer from frequent illnesses and misfortunes, they can get rid of everything by hearing, reading, or writing the goddess’s story. It is believed that by doing so, the goddess takes care of the children and increases their life expectancy. The Pregnant women must recite the Shashthidevi Stotram to develop offspring better.

If a mother gives birth to all the children, the other mother who saves these children from hardships is goddess Shashti Devi. The story of this deity appears in detail in the Ninth Volume of Devi Bhagavatam.
It has become a tradition to celebrate Bhadrapada ShuklaShashthi as a festival of goddess Sashtidevi similar to how we celebrate every Bhadrapada Shuklachaviti as Vinayaka Chavithi. The history of this goddess looks strange and great. While the name Shashti Devi was derived because she is the sixth incarnation of Mother Earth, the other name Devasena is derived from the fact that the goddess, the daughter of Brahma Manasa, constantly defended the army of the gods during times of war and gave victory to the gods. Devasena was married to Lord Kumaraswamy. The goddess stays next to the children in the form of Yogamaya, giving them a good life and protecting them like a foster mother. If the parents worship the goddess with Aarti when the children fall sick, it is believed that the goddess would Cure and provide good health to the children. Devi Bhagavatam also mentions an ancient story related to this.

During ancient times, a son named Priyavrathu was born to Swayambhuva. When Priyavrathu grew up, he was never interested in marriage, and he constantly dedicated his life to meditation. However, Lord Brahma got involved and explained the importance of marriage and got Priyavratu married to a woman named Malini Devi. The couple did not have children for a long time. Noticing this situation, Kashyapa Prajapati made Priyavratu perform Putrakameshti Yagna. After that, Malini Devi became pregnant and gave birth to a stillborn baby. The couple was devastated by this, and Priyavrathu took the dead baby and went into the forest crying uncontrollably in grief. Meanwhile, a divine plane came and stopped there. From that plane came a goddess shining in white robes and garlands.

Priyavrathu looked at her, kept the baby down, and bowed to the goddess. He asked who the goddess was and the reason she visited. Then the goddess explained everything saying that she was the sixth incarnation of Mother Earth, and then took the baby into her arms. Immediately the baby came back to life and started to smile. He shined like never before. Shashtidevi told Priyavrathu that the resurrected child would grow up with the name Surath and become a worthy person acquiring all the reputation. She also said she would constantly protect the children, and as karma is so strong, it is not always easy to avoid the hardships they acquire from their previous births. But, if they face any other challenges, the goddess has said to protect them from all the others.

The goddess said that she appeared as she couldn’t bear to see the dead baby next to Priyavrathu. She then gave the resurrected child to Priyavrathu and disappeared. From then, on every Shukla Shashti of the month and mainly on Bhadrapada Shukla Shashti Priyavratu started to worship Sashtidevi. Since then, people began to worship Sashti Devi in the house where the birth has taken place on the sixth day, eleventh day, and the day of Annaprasana.

The goddess is worshipped with flowers and by following the Shodashopachara puja ritual. It is believed that the goddess blesses the infants with excellent health and blesses the adults with great well-being and prosperity. Devi Bhagavatam describes Shashti Devi as a special goddess who protects children like a mother.

Who is the real love of Draupadi?