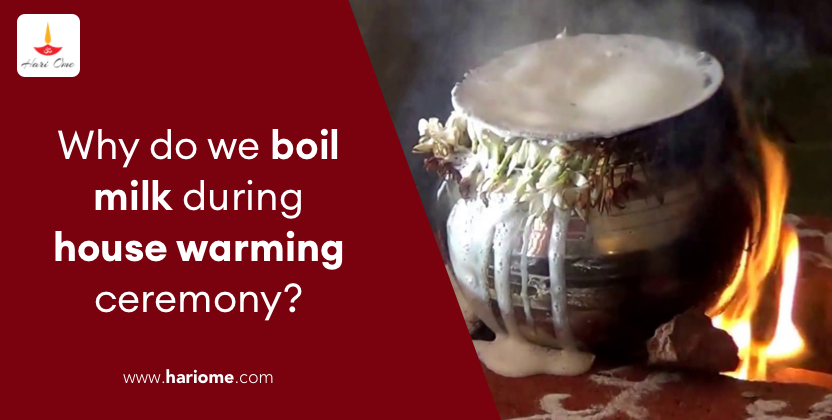 Moving to a new home, rented or owned, is associated with certain rituals. When we buy a new house, a ‘Gruha Pravesham’ is usually done with Vastu Pooja, Vastu Havan and a Ganesh Pooja in most families in India.

Also, there is a reason behind the tradition. Goddess Lakshmi is born from the ocean’s womb and is considered the chief of wealth and money. She is the beloved wife of Supreme god Lord Srihari, surrounded by a celestial ocean of milk(Kshira Sagara).

So, when the milk spills down or overflows during this ceremony, it would ensure our lives will be showered with peace, prosperity, happiness, wealth, and health.

It is also considered a “sign of prosperity” when milk falls in the east direction; “East” is a very promising side, according to the Indian Vastu.

During the house warming ceremony, a cow is allowed to enter the new home first and later the owner. It is believed that Cow is the home of 330 million gods and brings positivity and prosperity. So, once this is completed, the women of the house, mainly the sisters-in-law, conduct the milk boiling ceremony.

They cook rice with this milk and serve it to “Vastu Purusha” (god for construction of structures and building). This puja is considered highly auspicious and believed to bring wealth and peace to the house.

This is the reason for boiling milk during the house warming ceremony.

Simple Vastu tips to be followed in every house

What is the right time to clean your house?

Starting and Ending times of Solar Eclipse as per your Location

What is the myth behind quitting something you love/like after you...