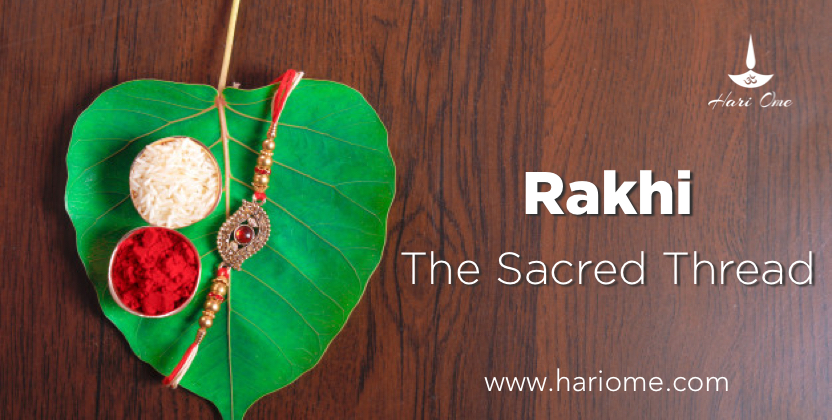 Many Avatars of Vishnu and many Puranas detail the existing of Celebrating Raksha Bandhan for a purpose. It dates during Vamana Avatara and many instances in Krishna Avatara too. The importance of Raksha Bandhan is that Lord protects his devotees to sustain the world live in peace. The experience on celebrating Raksha Bandhan emphasis the love and good relationship between all beings. It also teaches us how important that every being should help others and protect each other during the crisis.

The word “Raksha” itself means “Protect”. God prevails everywhere and protects us through some means of living beings in the world. Those who protect the weak is considered as a representative sent by Lord. Thus, saying, let’s hear the conversation and get more insight on Raksha Bandhan.

There lived grandparents of Abhi in a small village called Annavaram. They were waiting for their grandchildren’s arrival from various places. Most of them live in other countries and a few from other states. They were very much lonely. Soon, the most awaiting day dawned. The huge family house was filled with grandchildren, sons, daughters and all having fun. The family get together was to celebrate the temple function conducted by this family.

While playing, one day, the kids (Abhi, Lakshmi, Ram, Siya, Govind, Gauri) got into a fight with each other. It became noisy and started hurting each other. Grandfather stopped their fighting and started narrating the importance of Raksha Bandhan. Here are the conversations.

Grandfather: Children, This is the land which celebrates “Rakhi” and you kids who are brothers and sisters fight? It is not at all good for your future.

Grandfather: “Rakhi” or “Raksha Bandhan” is celebrated to strengthen the bond between brothers and sisters.

Govind: Is it so? When is it celebrated, grandpa?

Grandfather: It is usually celebrated during the month of Shravan Purnima, which is mostly in August.

Lakshmi: We only celebrate this or any other states in India celebrate?

Everybody in the house gathered to listen…

Father: It is mostly celebrated in North India. It is also celebrated from South India, but names are different.

Siya: Dad, how should we celebrate?

Lakshmi: I have seen in movies, sisters tie knot to brothers in their wrist.

Dad: That’s right, but there is more to it.

Ram: What needs to be done on that day?

Grandfather: Akshath is unbroken rice mixed with turmeric. This is to be poured on the head before tying the knot. This is considered auspicious.

Lakshmi: Interesting: How to start the festival?

Dad: Sister has to take head bath and can wear a new dress. This year, it falls on 15th August 2019 Thursday.  Before tying, sister will pray to God for the safety of her brother, perform Harathi with Diya, apply vermilion on his forehead (tilak) and then tie the sacred knot in the wrist. Nowadays, it comes with style and multiple colours.

Ram: Gauri, this time will you tie for me?

Ram: What else, Dad, as a brother that I need to do? Grandfather: You need to bless her and give her gifts.

Siya: How about sweets?

Dad: Yes, Sweets can be prepared and to be offered to God and distribute as prasadam to everybody.

Lakshmi: Maa, Can you tell me about the celebrations in other states?

Mother: This festival came from Aryan civilization and celebrated across India in different ways.

In Maharastra it is called Narali Purnima (mainly for coastal areas), Tamil Nadu is Avani Avittam (but not like Rakhi) mostly performed by men, Kajari Purnima in Madhya Pradesh for farmers, in Jammu they celebrate by flying colorful kites, in West Bengal, Orissa it is Jhulan Purnima in addition to Rakhi they worship Sita Ram, in Uttarakand they keep special fair on this day, in Gujarat as Pavitropana where people offer water to Lord Shiva to forgive sins and generally as Upakarma day. Nepalese also celebrate this day by preparing special item with 7 grains.

Gauri: Wow! Are there any other celebrations on this day apart from Rakhi?

Grandfather: Rightly guessed. This year Hayagriva Jayanthi is also celebrated on the same day. Hayagriva is God of Learning. Kids, you are all at the learning stage, so you must pray to Lord Hayagriva (Vishnu Avatar) and get his blessings (primarily Gnana).

Govind: In Hinduism, I hear that every festival originates from Legends. Is there any specific Legend for this festival?

Grandfather: Yes! There are many legends related to this festival. Foremost is during Vamana Avatar. When Mahabali was pushed down to pathala loka, he prayed to Lord that he should stay with him in Pathala Loka. Mother Lakshmi wanted Lord to be with her in Vaikunta. So, she tied Rakhi to Mahabali and requested him to allow Lord Vishnu to be back in Vaikunta. As it was sister’s wish, Mahabali allowed Lord Vishnu to go back to Vaikunta.

Siya: Nice to hear. So, brothers should always fulfil the true wishes of his sister.

Dad: There is an incident in Mahabharatha. During, Rajasuya Yaga, Lord Krishna injured his finger due to the killing of Sisupala. Seeing that, Draupadi at once, tore a piece from her new saree and applied the bandage to the wound. Thus, celebrating Raksha Bandhan.

Govind: I have read similar incident when Lord Krishna flying kite injured his finger and Draupadi immediately tore her saree piece and applied a bandage to the wound. This incident turned out as Raksha Bandhan.

Mom: Yes, Lord Krishna promises Draupadi that he would save her at all times. And it’s true, that throughout Mahabharatha, Krishna comes on time to rescue Pandavas and Draupadi. In Srimad Bhagavatham, when Lord Krishna ends his Avatar on earth, he says that he still owes to Draupadi and feels that he should have helped her more. This is the compassion of the Lord towards his devotees.

Keshav: These incidents teach us that sisters pray for brothers’ wellness and in turn, brothers protect sisters at all times.

Mother: It is not only the brother-sister relationship, but also this knot protects from evil. It is believed that mother Yasodha tied the knot to Lord Krishna in order to save from evil Kamsa. The entire Vrindavana Vasis (people) pray to Lord Vishnu to protect each limb of Lord Krishna.

Grandfather: Another story depicts that Raksha Bandhan is a sign of victory. Goddess Indrani, the wife of Indra ties, knot to Lord Indra before the war with Asura. Finally, Asura lost, and Indra won. The strength and prayer during this day is powerful. It also indicates the victory of good over evil.

Keshav: Interesting, there are so many legends.

Dad: Not only this, there are other legends related to Santoshi Maa, River Yamuna and her brother Yama are some of them.

Govind: Very heartening to hear about the legends and the celebrations. We feel proud of our culture and the bonding of our relationship. We should not have fought while playing. Sorry to everyone.

Siya: Right Govind, I have read that in my Sanskrit Class that “World is my Family – Vasudhaiva Kutumbakam” and I realize when we celebrate this festival.

Grandfather: Let’s all pray to Lord for this happiest moment; let’s pray for the happy world!

Gauri: Can I know the meaning for this Sloka?

Grandmother: It is “The sacred thread worn on this festival will protect and destroys all the diseases and inauspiciousness for the whole year”.

Grandfather: Also, recite the below Sloka –

May God Protect Us; May God Nourish us; May we work together with energy and strength for body and mind; May our Study be Enlightening and not giving rise to Anger; Om, Peace, Peace!

Everybody repeated and got excited. Grandparents were very much contented to see the family together for this celebration.

Gods and Goddesses to be Worshiped on Each Tithi

How to prevent cholesterol and BP with Sesame oil?